Politics 101 … And a possibility to find where you stand!

… And a possibility to find where you stand!

The fastest way to get introduced to politics is by having a classification system (model), which divides the political actors (parties and people) into groups. In the following text you will be introduced to some of the competing political spectrum models. At the end of the article you will get information on how to easily locate your political stance. The traditional model of the political space uses a Left-Right continuum, where the left is associated with pro-central planned economy (collectivist) and the right is considered pro-free market (capitalist). The model can be graphically depicted as:

But the “flat” representation introduces significant simplification. If you try to position the political parties on the model, the challenge you will face is that a similar position is obtained for parties/people differing substantially. One such example is a comparison between the leftists Stalin and Gandhi. The common ground they share – collectivism – is not a sufficient criterion to conclude their similarity. Stalin stands for state enforced collectivism, while Gandhi stands for voluntary collectivism at a regional level. The simple Left-Right model is insufficient for the classification or analysis purpose. A more sophisticated alternative is the Political Compass model. It is graphically presented as a two-dimensional coordinate system with the abscissa measuring the Economic dimension and the ordinate measuring the Social dimension. The Economic dimension varies from pro-central planned to pro-market governed economy. The Social dimension varies from Libertarian to Authoritarian. The Political Compass is practically an extension of the standard Left-Right, which successfully captures a bigger part of the real world’s complexity with a minor increase in difficulty to use/interpret. 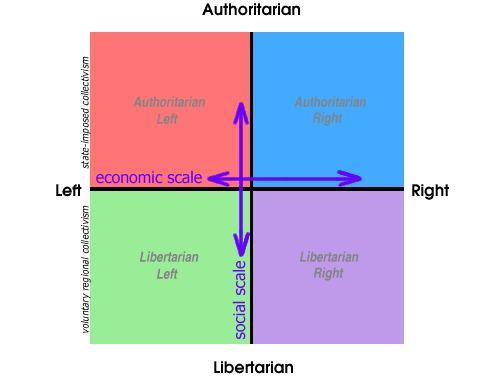 To observe the advantages of the model, try again to compare Stalin and Gandhi. They no longer share a place on the graph. The position of Stalin is in the upper left corner (Authoritarian Left), while Gandhi is placed in the lower left corner (Libertarian Left).   Note: There are other models besides the Left-Right, Political Compass and Nolan Chart.

The proponents of the Political Compass model have a webpage, where you can fill a free online questionnaire and find out what your political stance is.   Take the test: http://politicalcompass.org/test Time:10-15 min, entirely anonymous- no information is recorded. Additionally, the political compass provides you with the opportunity to compare your position with the position of various political leaders.

If you think that 10-15 minutes is too much time for you and accuracy is not one of your concerns then you can try the “World’s Smallest Political Quiz”. It takes about 2 minutes at most. It uses a Nolan Chart, which is a similar model to the Political Compass. Take the test: http://www.theadvocates.org/about/ 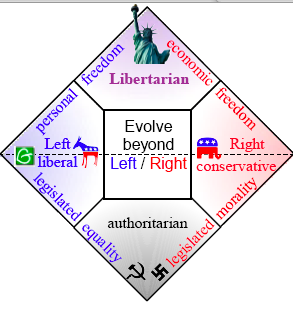 Nolan Chart, one of the competing models.  The text does not claim for ownership of the ideas, models and graphs presented. Its aim is to clarify the topic by using the existing knowledge.

Sasa Kovacevic is an official CFF author and founding member.