100 years ago Mises published his first great work titled The Theory of Money and Credit.

While still a young man, Mises tested his mettle in the intellectual arena of his time, proposing with a clear mind and voice the teachings of the Austrian School.

In classic Misesian style the book delves into a thorough analysis of the roots of money, and once having established a sound intellectual base moves on to set up the intellectual scaffolding that is today recognized as the Austrian Theory of the Business Cycle.

Unlike some other later works, The Theory of Money and Credit is written for an audience of economists, thus the writing is scientific and precise.

Decades before Keynes had publish his General Theory Mises skillfully wed both the microeconomic and macroeconomic divisions of economic science into a single coherent theory. The bridge between the two worlds of economics had been crossed.

The Theory of Money and Credit is divid 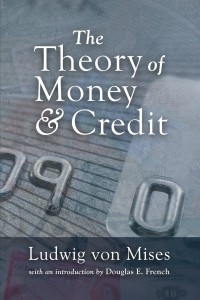 ed into four parts, each incorporates and logically expands on another. The topics of the parts are given below.

Part one: The Nature of Money.

Part two: The value of Money

Within in these four parts major economic concepts-such as Mengers’ theory of the Origins of Money-are introduced and expounded. Errors that many economists make (even today) are tersely analyzed and refuted. Among these are the concepts of Utility measurements, objective value theories and criticisms of money. Mises draws on other Classic schools of economics, such as the Currency and Banking schools, incorporating their insights and discarding their errors.

Mises carefully characterizes the different types of money, and using these definitions is able to recognize the effects of increases in fiduciary media and the revisions of peoples economic habits. Thus the Austrian Business Cycle Theory is born.

“The best book on money ever written”

For those minds interested in all things economic the book is a great read. As Mises deals with his subjects in a broad sense, showing considerable knowledge of the economic field, introducing various perspectives many of which are contrary to his own.

There may be no greater tribute to Mises’ work than to read it, understand it, and promote it. The Ludwig von Mises Institute allows you to do just that. The book is provided in a free digital form, or paid paperback here.